Mr. Tlale was also voted Mzansi´s Star Fashion Designer at the Mzansi Star Awards and he was also nominated at the Mercedes Benz Fashion Awards 2008. Mr. Tlale was invited to judge the Elle New Talent 2008 competition, a place where he began his journey in fashion.

In addition, it was also in 2008 that David Tlale launched his Green Collection for the voluptuous women of Mzansi; a collection that modeled by ´South African´ celebrities and journalists, including the likes of Judith Sephuma, Lebo Mashile, KG Moeketsi and Anele Mdoda.

His proud moments in 2008 include designing a showstopper for British model, Jourdan Dunn, which was showcased at Virgin Mobile Cape Town Fashion Week and being chosen to be an ambassador for the Change-4-Ever campaign, which aims to alleviate poverty in Southern Africa.

In 2010, Mr. Tlale proudly showcased a 54 piece collection accompanied by a live, 28 piece orchestra at the African Fashion International Week (AFI) during the FIFA World Cup in South Africa.

Breaking all boundaries, David Tlale hosted an outstanding show on the Nelson Mandela Bridge during Joburg Fashion Week 2011. The collection celebrated Nelson Mandela´s 92 years of life as it consisted of an unbelievable 92 pieces showcased by celebrities, models, sports men and women, as well as business people that all together make South Africa beautiful.

Both daring and dramatic, Tlale is a brand that defies convention and a brand that impenitently employs unpredictable use and understanding of fabric, color and texture.

It is with this understanding that the Tlale brand developed to be one of the most formidable fashion labels in South Africa to date. It came as no surprise when David Tlale was awarded Fashion Designer of the year at the recent ARISE Africa Fashion Awards, when he presented a Ready-To-Wear Collection that defied all expectations. With this award, Mr. Tlale had the opportunity to showcase at the Mercedes Benz New York Fashion Week, in September 2009, courtesy of Arise Magazine.

Since his catwalk debut in 2003, David Tlale has enjoyed outstanding exposure on both local and International catwalks, taking the label to astronomic heights. David Tlale is a household label that firmly stands its own ground among a sea of other labels; this being attributed to the sheer design erudition and precision that challenges mediocrity.

Mr. Tlale Proudly supports United Colors of Fashion, Incorporated and its HIV/AIDS program at the Soweto Hospice in South Africa. 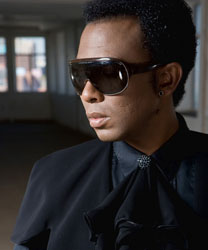