Pat Cleveland is an international modeling icon. She has worked for the most prestigious fashion designers including, Armani, Halston, Stephen Burrows and Valentino, both on and off the runway. Ms . Cleveland has also been seen in the work of important photographers including, Avedon, Helmut Newton, Horst and Steven Meisel.

Throughout her illustrious career, Pat has appeared on the pages of the world’s most prestigious fashion publications such as, Ebony, Essence, Interview, W Magazine and Vogue. Her beauty has not been overlooked by the art world having sat for Andy Warhol and Salvador Dali. She has done numerous commercials and advertising campaigns, the latest being Mac make-up in September this year. She is mentioned and quoted in more than 50 books.

As a Fashion Ambassador, Ms. Cleveland has traveled extensively representing the United States and the United Kingdom on trips to China, Italy and Russia. In 1989 Pat represented the city of Barcelona as a fashion icon for the Summer Olympics in Spain. Recently she was the recipient of the “The Thurgood Marshall Award” for being a Fashion Icon, The Huffington Post 100 Game changers and was honored at the Metropolitan museum of art for her contribution in Versailles 73.

In addition to modeling, Pat has performed, singing and dancing on stage in Let My People Come on Broadway; acted in several foreign films including “Rio Babilônia” (Brazil), “Iago Shakespeare” (Italy), “Sotto il vestito niente” (Italy) and “Hair, The Musical” (Mexico); and has appeared in cameo parts for The Devil Wears Prada, “Sex and the City: The Movie” was a guest judge on “America’s Next Top Model” and most recently on “The Face.” She was also featured in numerous documentaries the most recent being; “Versailles 73”, “Ultra Suede in search of Halston ”, ” About Face” and “ Scatter my Ashes at Bergdorf”.

A superstar in Italy, Pat has recorded original lyrics written for Joe T. Vanelli and published a book of poems, In The Spirit of Grace, also published in English.

Pat resides in the US, currently writing her autobiography. She lives with her husband Paul Ravenstein and has two children, Anna & Noel. 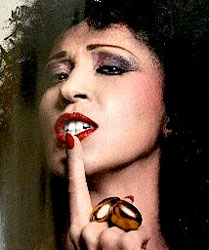