Omar Salam is the Founder and Head Designer of Su Kei Na Fashion House. Born in Dakar, in the Republic of Senegal, his childhood was spent in various countries in Europe. As a child, Omar had a very colorful and exciting imagination, which would later manifest itself in his designs and craftsmanship. He started sewing at an early age, inspired after he saw his mother, Sukeina, stitch together different pieces of fabric and patterns. Omar was also very fascinated with the power and intimacy of communication. When he came of age, Omar decided to study screenwriting with the hopes of one day getting into film. He later realized that he could tell more intricate and vibrant stories through fashion. “Clothing is a language within itself,” he says.

In 2001, Omar started working for world renowned French fashion designer Madame Sonia Rykiel. Starting off in Sales, he would later be promoted to Merchandising, and finally became Visual Director for the New York City branch. Omar spent seven years with Mme Rykiel. He regards this experience with great respect and love, especially for the extraordinary designer, who once told a manager to “Let Omar play… It should remain a game.”

In 2008, Omar decided to tempt fate, spread his wings and establish his own fashion house. Su Kei Na, the namesake of his mother, is very unique. The colors are vivid, while the fabrics are delicate, lush and elegant. His boldness is reminiscent of a young Gianni Versace, with the fineness and precision of Valentino. Omar Salam has fully engaged himself in his craft. His creations are not made to highlight himself, but rather to celebrate what we all enjoy about our bodies and life. “I truly must be honest. I want to dress people as they want to be. My clothes are made to move with you. Without a body in them, they are nothing.” 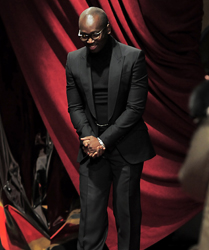