The seeds of Yemi Osunkoya’s fascination with fashion in general and bridal wear in particular were sown at his first high society wedding in Nigeria. From then on, whenever he accompanied his parents to social gatherings, he would feel compelled to draw the dresses and guests after the function. So began his life-long love of figurative drawing. As he entered his teenage years, Yemi fell under the spell of the glamour and sophistication of Bob Makie’s costumes for Diana Ross, and Anthony Price’s gravity defying gowns for Jerry Hall. A career in fashion design was beckoning.

After a degree in Textile Design at Obafemi Awolowo University, Nigeria, Yemi completed his studies at the Paris Academy of Fashion, Oxford St, London, gaining top marks in both men’s and women’s wear.

Yemi completed his studies in 1990 in London at the height of the recession. However, undaunted by the economic climate and determined to make his own mark, Yemi decided to strike out on his own and founded his own design label Kosibah.

It was natural that he would name the company in honour of his greatest supporter: his mother, Cosiba. The name Cosiba comes from the Republic of Benin and is the Day Name given to a female child born on a Sunday. However, in deference to the Yoruba tradition of not addressing elders by their first names, Yemi changed the spelling of the company name slightly as a mark of respect.

Despite A-list success, Yemi’s designs are firmly rooted in the desire to make every woman look and feel good. Drawing on his African roots, Yemi’s designs celebrate the curves and shapes of real women. His signature use of corsetry and draping creates gowns that flatter and enhance every woman’s figure. And his long experience of providing a personal attentive service to each of his clients means that he is now an expert in providing exactly what his clients want.

He also draws inspiration from the vibrant, multicultural life of London which is now his home. The capital’s diverse populations allow Yemi to fuse influences from across the world into his designs with the luxurious fabrics, sumptuous embellishments and meticulous attention to detail associated with the finest traditions of Parisian couture. 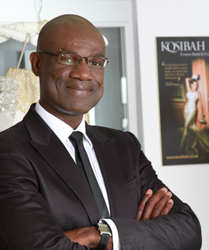