As she entered her freshmen year in high school, Norah Kavanagh’s eyes opened up to many possibilities. Mostly attending private school, she became accustomed to one-dimensional fashion in the form of plaid skirts and the simple white corsage. On weekends, jeans and t-shirts became her outfit of choice. In 2007, she attended a public school and was amazed by how many colors surrounded her. Many students wore what they felt expressed themselves. Most importantly, each had his/her own identity. Slowly, she started breaking out of her shell and her interest for fashion started growing

Fashion has inspired her to stand out by expressing herself through clothes. With the help of UCOF, she hopes to learn and expand her knowledge in the fashion industry to combine it with business. 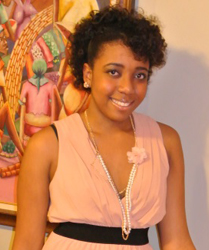