Carmen grew up in Westchester County, New York. His father was an anesthesiologist and mother, a nurse. In the Valvo home, traditional children’s story and coloring books were supplemented with educational and anatomy related volumes in hopes their son would follow in the family footsteps. This is where Carmen first developed the formative knowledge of the female figure that would later help him to become such a successful and intuitive designer. His artistic spirit revealed itself early on through his passion for oil painting and portraiture as well as fashion illustration. Before heading to Vienna where he hoped to pursue his artistic dreams, Carmen first attended the Fine Arts program at Manhattanville College. While traveling throughout Europe and exploring the rich cultural tapestry of centuries-old historic cities and quaint countryside, and becoming proficient in several languages, fate intervened – Carmen was injured in a car accident and returned to the States to recover. Finally realizing his true passion had always lay in fashion design, he set his sights on a career he thought was only a fantasy and enrolled in Parsons School of Design.

Upon leaving Parsons School of Design, Carmen’s first position was with Bill Atkinson in mid-1970. However, Carmen’s real professional career began with an offer to work in Paris with the house of Nina Ricci. This was followed by a position with Christian Dior in the same city. Dior is where he established his true sense of the couture aesthetic, which so embodies all of his works to date.

By 1989 he was ready to launch his own label. With only a few thousand dollars, he fearlessly pulled together a collection to show to department and specialty stores at the fall fashion market in New York. His collection was an instant success and was bought by several top stores. But it was his eveningwear, his true passion, which captured the hearts of buyers at both Saks Fifth Avenue and Neiman Marcus.

Having established a solid reputation as one of 7th Avenue’s most noteworthy independent brands with his Black Label Collection, Carmen launched Carmen Marc Valvo Couture in 1998. After years of working in the Parisian ateliers, Carmen was finally able to truly utilize his skill and experience to create his celebrity clientele the original Carmen Marc Valvo creations that they so desired. Twice each year during New York Fashion Week, Carmen’s Couture collection is presented showcasing his extraordinary craftsmanship.

Since then he has been exploring his soul’s desire to bring glamorous dressing to every woman’s life through his eponymous Collection, whose enchanting designs have become synonymous with grace and refinement. Today his elegant eveningwear collection is a fixture at fine department stores throughout the world. Carmen’s label also appears on his highly sought-after clothing and accessory lines – including swimwear, eyewear, footwear and fur, which reflect the designer’s artistic sensibility.

“While other designers seek to shock, Valvo’s creations shine in the marketplace.” -TIME magazine

In 2011, Carmen brought his talents from the design studio to the printed page with the publication of his book, Dressed to Perfection: The Art of Dressing for Your Red Carpet Moments (Rizzoli). This book captures Carmen’s unique perspective on design and silhouettes, offering expert insights and advice for dressing for all seasons and body types, for women everywhere who want to look their best. The designer also shares his personal sources of inspiration, from the idyllic private hideaway that refreshes his creative energies, to the women who inspire his creations.

“Over the years, the designer has demonstrated the talent to do it all.” -Women’s Wear Daily

Today, the Carmen Marc Valvo lifestyle brand is made up of several collections. Through special licensing partnerships, each top-tier company contributes a unique component that embodies the integrity and vision of Carmen Marc Valvo.

Each one of Carmen’s elegant designs combines classic artistry and refinement in striking silhouettes designed to enhance and complement the inherent beauty of the female form. His unique ability to highlight a woman’s best features through the flawless execution of color and fabric has made him a favorite of celebrities seeking an unforgettable special event look. Over the past 24 years, Carmen’s stunning cocktail dresses and breathtaking couture gowns have graced some of the world’s most glamorous and talented women. 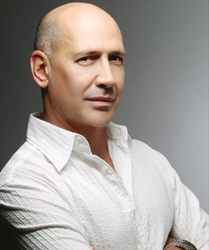