Born and raised in Paris, France, she studied high level mathematics and advertising, graduating from the European Business School, before moving to New York where she shifted her interests to her true calling, fashion.

Christine’s career took off immediately and she found herself styling major advertising campaigns such as L’Oreal, Revlon, Elizabeth Arden, Estée Lauder and many others.

In the nineties, she moved back to Paris and became a fashion editor and a regular contributor to French Elle, Vogue España, and Vogue Hommes International.

Fascinated by global youth culture, she has also dedicated time over the past nine years to Trace Magazine where her role as Fashion Director at large often involved creative direction and spanned collaborations on special projects for Absolut Metropolis in Tokyo, Leblon in Rio, in addition to Nike, Y-3, Adidas and Puma. These creative collaborations enabled her to travel the world extensively and sharpen her eye on the world’s most exciting emerging trends.

Christine de Lassus’s global approach to fashion allows her to perfectly combine art and a modern vision of fashion with business and clients demands, making her an invaluable asset to her collaborators. 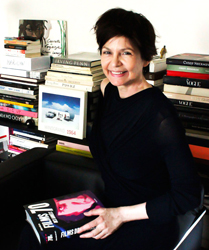