Of course, anyone enveloped in a Bouwer design, whether a sequined mini or a jeweled silk taffeta ball gown, gets noticed. This, in turn, has gotten the attention of Hollywood’s a-list. His designs have graced the covers of numerous magazines and the red carpet at movie premieres and awards shows. That’s part of his allure—the formfitting look—imbued with a genuine desire to celebrate, as poet Walt Whitman so neatly put it, “the body electric.”

Indeed, one of Bouwer’s strong suits is his ability to cut a garment to complement a woman’s figure. Another is his acclaimed talent as a draper, a skill he mastered during his tenure with legendary designer Halston.

Bouwer, who grew up in South Africa, had an unusual career trajectory. He was drafted into the army, a national requirement, before studying fashion and winning the South African Vogue Young designer award. His roots may be African, but his ambition drove him abroad. “There was only one place to go,” he insists, “New York.” His arrival, or what he calls his big “Hollywood moment,” came when Halston studied his portfolio, then uttered these six prophetic words: “I think you got something, kid.” what Bouwer got was an offer to join Halston’s studio.

There, he learned various techniques, including the aforementioned draping, which were a hit on the runway. “Once I had Halston on my resume, it got easier,” he admits. “I gradually found patrons, and I went out on my own in the ’90s. I worked out of my Greenwich Village apartment with Paul Margolin, my business partner. He handled the press and daily operations; I handled the designs. And we worked very hard. I’m lucky in that I can cut and sew.” His versatility proved crucial to his success, as did word-of- mouth marketing and finding his niche as one of the first eveningwear- focused designers in the United States.

The Marc Bouwer aesthetic is the very definition of timeless elegance, touched by his love of cinema (he counts Blade Runner, Hero, and Marie Antoinette among his favorite films). The look is distinct—lush colors, plunging necklines, and daring up-to-there slits are undeniably sexy, yet kept in check by an appreciation for classic silver-screen glamour.

Recently, Bouwer’s strong ties to L.A.’s glitterati have made him a sought-after spokesperson for the entertainment industry. As a guest stylist and judge on many popular programs, he’s become the go-to personality for advice on style and fashion. Whether making a guest appearance or spending long days designing a new collection, he sums up his professional demeanor in two words: hands on.

“I’m protective of my brand. And strong, sexy women will always be my muses. 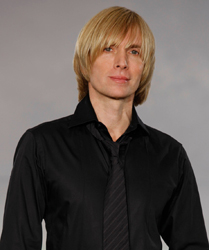