Ron & Ron, a menswear fashion label specializing in made-to-measure suits, was established in 1999 by twin brothers Ronald and Rony Delice.

The twin designers were born to a seamstress mother and a tailor father in Port-au-Prince, Haiti. Inspired by their lifelong passion and seeking an alternative to the monotonous style of European-inspired minimalist design and limited detailing and sizing, the Delices set out to create something refreshingly different within the very competitive high-end men’s suit industry. Celebrating the essence of their Caribbean heritage, Rony and Ronald have been widely recognized for incorporating brilliant colors with truly remarkable details. The twin brothers often combine red-stitched button holes, contrast piping, top stitching and enhanced peak lapels on slender silhouettes cut from imported Italian cloth.

The Delice brothers developed their sharp eye for detail and penchant for quality by converging the skills they gained while apprenticing within Europe’s most established fashion meccas. After completing their academic studies in New York City’s Fashion Institute of Technology, they headed to Italy and France; Rony to the Via Condotti in Rome and Ronald to the Faubourg Saint-Honore in Paris. Nurturing their panache in impeccable tailoring from their experiences abroad, the twins returned to New York in the late 80’s and began working with Avaram Goldman, then owner of Beau Brummel in Soho. They quickly transitioned from salesclerks to custom tailors for the reputable men’s boutique. Compelled by popularity and growing client demand for the brothers’ own custom- made suits, Goldman approached them with an offer to finance a signature line for the store. By 1998, the duo launched their private line, Ron & Ron.

By integrating subtle influences from their cultural background and adding signature detailing, this charismatic duo accentuates timeless, classic tailoring with their own distinctive and versatile touches, offering a modern appeal. Success of the Ron & Ron label has been contingent on personal dedication and creative integrity within a continuously evolving industry. Their line has clearly been an influence to classic menswear as can be seen from the rising number of suits that have added the twins’ signature color button hole and top stitching. The clear difference though can be seen in the way only a Ron & Ron suit fits a man; complementing his body and personal style effortlessly. 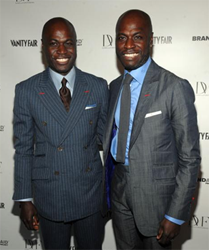