Born in Taipei, Taiwan, Breton, currently resides in New York City. He has been designing since the age of 11 and is known for his signature detailing, and fabrics.

“His (Breton’s) clothes created a look of beauty” – VOGUE España,

“In addition to his ethereal gowns and simple shift dresses, Breton also does menswear and bridal lines.” –ELLE

“Pants You Can Sleep In, a variation on volume came in the form of slouchy pajama pants from Malan Breton” –NY Times

“From gorgeous dresses, skirts and menswear, Breton clearly knows how to design with a woman’s body in mind!” –CNN

To cater to his international clientele, Malan Breton opened the first flagship store in NYC’s East Village, in 2007.

Due to massive growth and expansion into menswear, accessories, bridal, and the quickly evolving international platform, offices were opened in Manhattan’s garment district to focus on wholesale sales, and licensing.

Known for designing the look of NBC‘s number one rated game show “Minute to Win It” for which Malan Breton was nominated for a 2011 WGSN Global Fashion Award. Malan Breton has also lent expertise in the industry to OK! Magazine, Cosmetic Executive Women, Australia’s Next Top Model, The Today Show, Smithsonian Cooper Hewitt, Princeton University, Dallas Morning News, Bravo TV, MTV’s Music Awards, Project Runway, CBS News and countless other press, media, and educational outlets. Breton’s Collections have been featured in hundreds of thousands of media outlets around the world, including being featured on the hit AMC show “Breaking Bad“.

In 2003 Malan Breton was hired to design the working wardrobe for New York City restaurant Megu, for sommelier Ryo Wada. The couture wardrobe consisted of fourteen separates, made in silk, jade, embroidery, and traditional Japanese kimono elements. These are known as Breton’s first design pieces, and his first professional design job.

From 2006 to 2012 ELLE Magazine partnered with Malan Breton collections to present the men’s and women’s fashion shows at New York Fashion Week.

In 2009 Malan Breton created a capsule collection for Bravo Television Media’s, “Shop by Bravo” website, the collection consisted of handbags, and men’s jewellery.

For Spring 2009 Twentieth Century Fox partnered with the Malan Breton fashion show at Bryant Park, to celebrate the 40th anniversary of the Julie Andrews classic film Star. The collection was inspired by the film, and each of the guests received a special 40th anniversary edition DVD of the film.

For Spring 2015 Malan Breton presented the collection at Mercedes Benz Fashion Week as a partnership with the Taiwan Tourism Bureau, the show was titled “Malan Breton a Journey to Taiwan; The Heart of Asia”.

In 2011 Malan Breton became the first designer in the history of fashion whose designs were part of a packaging deal with XBOX 360, Nintendo Wii systems, and ZOO for the video game “Minute to Win It“.

Malan Breton also has a syndicated, celebrity fashion column in OK! Magazine titled “Malan’s Musings” and his fashion coverage of the British royal wedding received 10.8 million unique views and coverage in over 100 publications. His Bridal collection was also a consideration of the bride to be.

Malan Breton is one of the first fashion houses to utilise social media to market the brand and is known as one of the innovators of Viral Marketing, and Internet technology in fashion.

Malan Breton was the subject of a six part series on Bravo TV titled “The Malan Show” “A six part series following the process of making it in America as an independent designer!” –Page Six

Malan Breton Collection is featured globally with its signature silks and men’s blazers as one of the hottest items amongst the male and female stars of Hollywood and the great white way. Breton cultivated his knowledge of menswear construction while at Turnbull & Asser. His mentors in fashion have included Paul Cuss, Eileen Ford, and Arnold Scaasi .

​As a Philanthropist, Malan Breton Collection has dedicated their efforts to amFAR, and Care and Share India (To bring awareness to this organisation Malan Breton closed the NASDAQ in 2011).

As a designer “Breton is self taught and never went to design school. Talk about raw talent!” –NY Daily News. 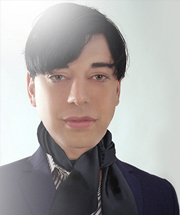