Kaye is currently playing the lead role of: `Donna Sheridan´ in the North American Tour of Mamma Mia.

Kaye has performed throughout Australia and New Zealand, South Africa, Singapore, Hong Kong, Korea and Thailand in the biggest musical theatre productions to hit the stage.

She “literally tore the room apart” with her outstanding interpretation of Kate from “The Wild Party”, and then bought the room to tears in the title role, as the sensitive, fragile Jen in “John & Jen”. Kaye has also worked closely with Tony Award Winning Director, Richard Maltby Jnr, and Oscar Winning Composer David Shire on both `Closer than Ever´ (Ms Byrd), and `Take Flight´ (Powder Puff Girl).Kaye Tuckerman was the winner of The New York Award at the 2003 Sydney Cabaret Convention, the 2004 Broadway/Australia´s Female Cabaret Artist of the Year, the 2007 Short, Sweet, and Song Peoples Choice Award, and the 2008 Glug Award for Best Cabaret Performer.

Kaye has toured of Australia, Asia and the USA with her sell solo cabaret shows; `Man-eater´, `Stalker´ and `Siren´, and was critically acclaimed in
her role as `The Chanteuse´ in `Absinthe´ for The Famous Spiegelworld in New York and Miami. Kaye´s work pushes the boundaries of cabaret with itsdark, edgy European overtones. Kaye recorded several songs for BBC Radio; “Miss Byrd”, from Maltby & Shires “Closer than Ever”, “Raise the Roof” from Andrew Lippa´s “The Wild Party, “Ready for Love” by soul diva India Arie, and the remarkable “Grandfather” by Stephen Lynch.

Kaye can also be seen in the feature films Matrix ” Reloaded and Revolution”.

She has been described as “Australia´s Ute Lemper” by leading critics.

In “Man-eater! She Ate Them All” she was described as “chillingly convincing and utterly arresting”.

In the confronting black comedy “Stalker”, she was critiqued as “Spine-tingling”, a “mod-pixie punk with a voice that literally stops you in your tracks”.

She then bought the room to tears, with her moving critically acclaimed cabaret jouney, “SIREN´ at The Adelaide Festival Centre.

Kaye Tuckerman says Africa runs in her blood, she is excited to be part of this amazing life saving cause helping the Soweto Hospice in South Africa that helps HIV/AIDS young adults and children. 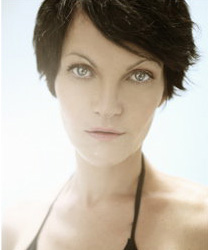