« Back to The Team

Namibian-born Jan Malan, director of Umzingeli Productions, is one of Africa’s leading show producers. Umzingeli means “hunter-gatherer” in Xhosa and Zulu, as the company prides itself on finding and nurturing fashion and beauty talent that hails from Africa.

Since starting his show production career in 1985, his momentous work, energy and positivity towards the industry has led him to stage high profile productions in 22 countries spread over four continents. Using his powerful knowledge of the events industry, he brainstorms truly innovative concepts and executes them professionally with an enthusiasm that can only be described as electric.

Malan pioneered Africa Designs for M-Net and AngloGold, a pan- African fashion designer competition, in the year 2000. This was the first time that African designers showed on schedule at New York Fashion Week in a

But regardless of an impressive client list, which includes names such as Elton John and Tyra Banks, Malan has continued his passion for charity work by giving his time to produce shows for the Witwatersrand Hospice, The Organ Donor Foundation, the South African Federation for Mental Health and most recently, United Colors of Fashion in New York. UCOF honored him with the “Producer of the Year Award” in 2012. 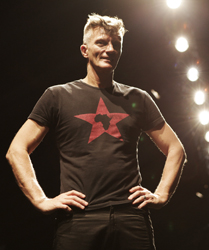