« Back to The Team

Sandi Bass is born and raised in Nashville, Tennessee. After graduating and moving to Los Angeles there she studied Art Culture and Fashion Design at LA City College while knocking on door by door to pursue her dream in fashion.

A few years later in LA…

Sandi was discovered by Monsieur Hubert de Givenchy and taken to Paris, France as his muse… This historical, “Girls of Color Cabine” that took Paris by storm was on the heels of the Versailles Show with Bethann Hardison, Pat Cleveland honoring designers Halston and Stephan Burrows. Sandi spent the next fifteen years as a top runway model living in Paris, Rome, and Tokyo working for top designers, Valentino, Christian Dior, Emanuel Ungaro, Karl Lagerfeld , Fendi, and the list goes on.

She also found herself in a singing group on tour as The Peter Jacques Band at the famous Forum Coliseum in Rome opening for The Bee Gees and Aba but her passion was for fashion.

After turning in her runway pumps, Sandi returned to America, mading appearances on numerous television shows as the on camera personality and fashion coordinator presenting “Fashions of the Moment,” she also appeared as guest judge on Tyra Bank´s America´s Next Top Model. As a writer, Sandi´s articles on modeling and fashion have been published in magazines and newsletters.

Well respected in the business…

Sandi is now on the other side of the modeling industry. With experience working as Director of Runway at a top NY agency and traveling the world as a top international model scout placing models in Asia, Europe, US and Canada. Combining her great communication skills, her deeply rooted connections with agencies worldwide and her knowledge of the industry, she understands the importance of relationships and ethics
in any business. Sandi is sought after by modeling agencies, schools and conventions to give seminars to models and parents, knowing they will get sound advice. She has traveled the world but it is her inviting southern comfort personality that has taken her around the world.

Now, to give back…

Sandi works closely with “Cover Girls for Change”, models of the 80´s and 90´s uniting to mentor young models through events during NY Fashion Week.

Sandi is honored to work with UCOF, United Colors of Fashion as their Casting Director for their annual Fashion Show Spectacular in New York. The goal in their Charity Care Program is to help people living with HIV/AIDS in Africa and worldwide.

Sandi has recently been chosen as a member of The National Association of Professional Women in New York.

Sandi lives in New York City and has a beautiful daughter, son in law and two wonderful granddaughters. 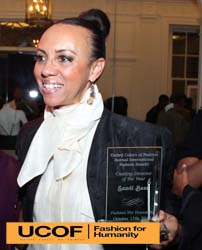