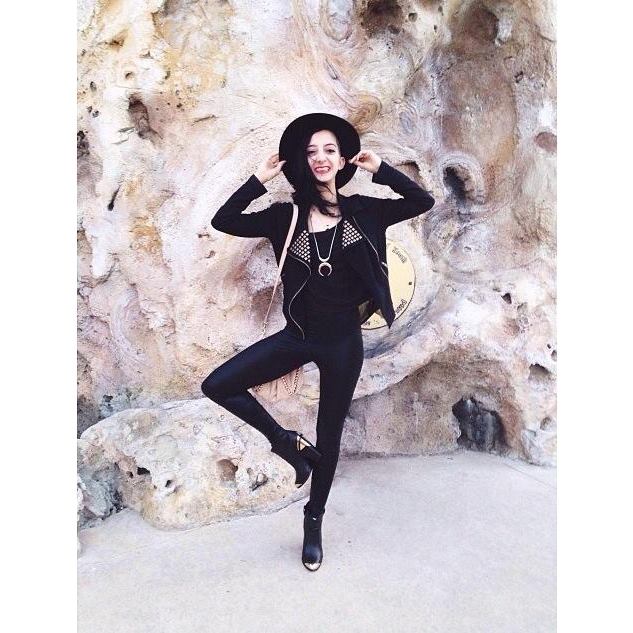 I’m currently a fashion merchandising major and print journalism minor at the University of South Carolina, where I’m doing my best to create a solid foundation in which to become a professional fashion journalist. I’m a slight brunette with a penchant for dark souls with soft hearts and yearning minds and I’m constantly inspired by everything the universe throws at me. I view fashion as art you live your life in, and this, combined with my love for the macabre, has really helped shape my personal style. One of the reasons I am so drawn to UCOF as an organization is because it embodies my ultimate long term goal, which is to use fashion to help change the world in a positive way. UCOF is constantly helping and empowering youth through fashion and is helping the world through their volunteer work in countries like South Africa and Haiti. UCOF inspires me to use what I love to make a difference, and I believe that’s the most beautiful gift of all.

ICON OF THE WEEK: MADONNA 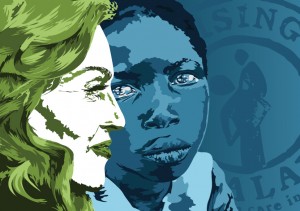 There appears to be nothing that Madonna can’t do. By pushing the boundaries of mainstream music and constantly reinventing her image, the 55-year-old American recording artist has established herself as an incredible pop icon that is here to stay. From her over the top fashion choices (need I remind you of the 1990 Jean Paul Gaultier cone bra?) to her unpredictable stunts (remember her lip lock with Britney Spears during the 2003 VMAs?), the performer has been brilliantly shocking the public her entire career. With over 300 million records sold worldwide, the Material Girl has dominated the music charts for decades. On top of all of her career accomplishments, Madonna still finds time to give back.

In 2006, Madonna and Michael Berg co-founded Raising Malawi. This non-profit organization was formed to help bring an end to the severe poverty and suffering that over one million Malawi orphans and other vulnerable children endure. The foundation supports community-based programs that provide these children and their caregivers with necessities such as nutritious food, proper clothing, safe shelter, formal education and medical care. In addition to this, Raising Malawi collaborates with and supports non-government organizations that offer struggling families opportunities for sustainability in the country. Madonna’s organization works at a grass-roots level in order to ensure that there are dedicated people in the villages who truly know Malawi’s challenges and are capable of providing the help that is needed. In just a little over seven years, the Raising Malawi foundation has been able to make a positive, substantial and lasting impact for hundreds of thousands of children living in poverty.

BY: Anna Mathias and Felicity Rankins 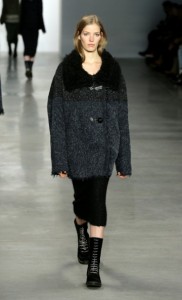 A model in Calvin Klein’s Fall/Winter 2014

Sadly, New York Fashion Week is coming to a close. On this final day, Calvin Klein proves that although their show is on the last day, the collection is ranked among the top. 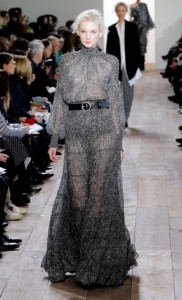 Michael Kors proves that he’s capable of much more than the watches and handbags everyone knows him for with his Fall 2014 collection. The American designer’s Ready-to-Wear collection did not disappoint. He created beautiful pieces for both women and men with a cozy, relaxed yet classy vibe. Kors tweeted of the collection “Urban polish with laid-back Northern California ease.”

Furs, knits, sequins and fringe graced the runway in neutral tones throughout the show. Model Carolyn Murphy opened the show in a flowing chiffon skirt and fur scarf. After this, a to-die-for long fur coat paired with a denim skirt and fringed bag added to the bohemian ambiance of the Kors collection. The show continued with stunning gray, black, camel and winter-white tones. This Fall 2014 collection is different from what the public is used to seeing from the designer. There was a sense of easiness to some of the pieces that came off as simple, beautiful and incredibly chic. With this collection, Michael Kors has showed us that his clothing is just as impressive as his accessories. We are looking forward to this California feel in the upcoming season. 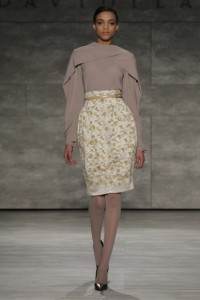 Complete with muted colors and chic shapes, David Tlale’s Fall 2014 collection provided its viewers an elegant look forward to this autumn’s style palate. Tlale has been a force in the industry since 2003, and his collections have consistently awed critics and consumers alike. Especially notable is the designer’s work with UCOF’s mentoring program for emerging designers. Tlale has been a supporter of UCOF since its inception, and 24 interns from the organization were able to apply what they have gleaned from the free fashion education program while working on his show. With Jan Malan and Karen Lee as show producer and casting director respectively, the show displayed diversity in a way that is not typically indicative of fashion week shows. This year at Mercedes-Benz Fashion Week, Tlale took on structured, yet feminine pieces while effectively displaying contrast by showing tops with flowing fabric and fitted skirts. The overall tone of the collection seemed to be ruled by neutral colors and unique fits. From distinctive split capes to glittering statement collars, this collection from David Tlale gives fashion enthusiasts everywhere a fresh take on appropriate elegance. 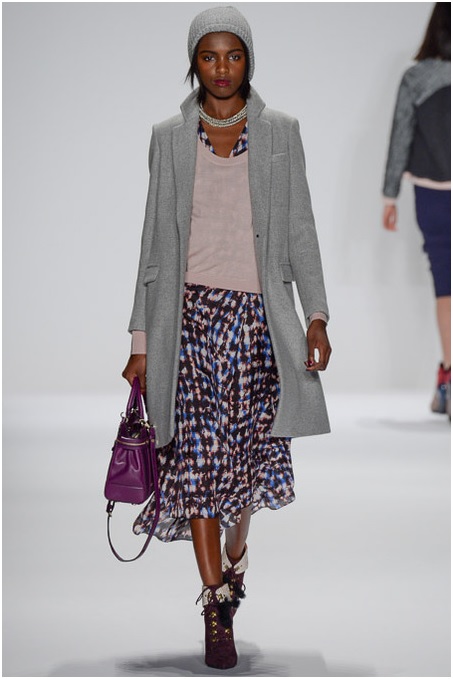 An ode to polished punk and effortless New York style, Rebecca Minkoff’s Fall 2014 collection consisted of the easy high meets low style we all so desperately crave. By pairing pieces like leather blouses with accessories like knit beanies and new age gladiator sandals, it is clear that Minkoff has a penchant for creating looks that we’d all love to live in. High heel tasseled sneakers made an appearance, and when paired with sleek bomber style jackets, they looked more suited for the runway than the court. Mid-calf skimming dresses in airy fabrics and vibrant patterns were displayed perfectly under sheer long sleeves and dove gray coats. Drop waist pants paired with quilted fanny packs also upped the fashion ante in this collection, providing an interesting take on a 90’s favorite. 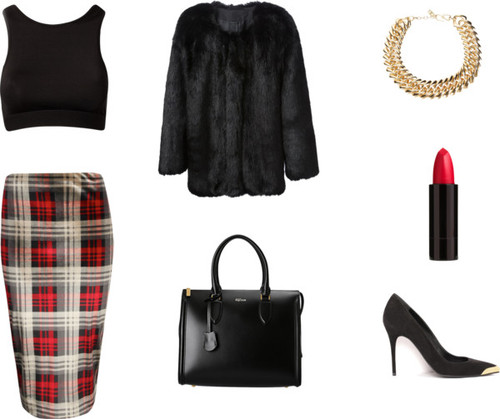 It is said that fashion always ends in excess. The era of the micro mini has come and gone, and its older sibling the maxi, has seen its 15 minutes of fame as well. This season it’s all about the love child between the two; the midi skirt. It’s quite refreshing to see the sophistication of the maxi merged with the sexiness of the mini; a fair compromise and easily the best of both worlds. Whether it’s a Dior “New Look” style midi, with a classic cinched waist and a full skirt, or a sleek body-con style, it’s tried and true and easily one of the best trends to hit the runway. The length is flattering on almost any body shape since the mid-calf length paired with the high waist helps to elongate and accentuate the beautiful figure of the woman wearing it. 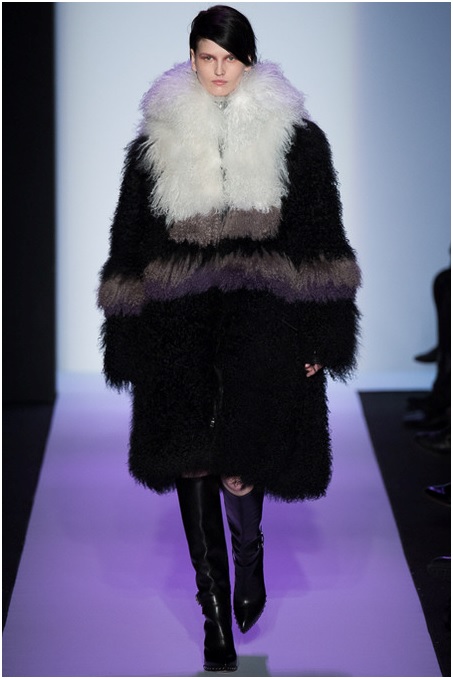 Starting off with a soft, electric beat and the perfect lilac runway, BCBG kept true to its high fashion and modern aesthetic with a show that did not disappoint. The first looks to hit the runway were soft, flowing kimono style dresses with color blocking in perfect peach and dusty blue hues. This new kind of color blocking was woven throughout the show and is a more subtle approach than seen in seasons past. A fur trend was also strung throughout the show, starting with statement accents at the beginning and later by incorporating fur on statement coats and even dresses. The show held true to BCBG’s style and approach to fashion. It displayed modern and high fashion pieces that are likely to instantly turn into tried and true classics.

ICON OF THE WEEK: Donna Karan

There are leaders in the fashion industry who are pioneers in their respective fields as well as innovators in the hybrid field of fashion and philanthropy; Donna Karan is one such authority.

Karan’s colorful upbringing is a large contributor to why she is now one of the most recognizable names in fashion. Born on October 2nd, 1948 in a New York hospital as Donna Ivy Faske, Karan grew up with a model mother and suit designer stepfather and who influenced Karan from a young age. Karan was accepted to the prestigious Parsons School Of Design, and by the time she was at fashion school she had already started selling her own designs at boutiques.